‘Gilmore Girls’ is currently back in production and no one is more excited than this girl!

I tell ya, the timing for me is impeccable.  See, I didn’t watch the show the first time around (go ahead and judge me, I deserve it).  I was too busy in the early to mid 2000’s trying to get my life in order, turning 30, blah, blah. Way too busy.  When I came around to watching regular TV again, I got hooked on Parenthood, which incidentally sparked my obsession with all things Lauren Graham.

Last summer while perusing Netflix I came across all 7 seasons of ‘Gilmore Girls’ so I decided to watch 1 episode to see what all the hype was about. So yeah 2 weeks and 7 full seasons later, I finally felt what the rest of the world had 8 years prior–utter anguish that it was over! How could they cut it short like that, when there was so much more of the girls’ journey to live vicariously through? Well in case you’ve been living under some sort of proverbial rock, you know that the show’s creators heard our cries peeps, they are filming 4 brand new 90 minute episodes in Los Angeles right now. Probably as you’re reading this!

So pull up a cozy chair at the Dragonfly Inn, and join me on a little trip down memory lane (or Sores and Boils Alley, if you will) ..

Whether you’re Team Dean, Jess or Logan you will be glad to know that all 3 of Rory’s boyfriends are slated to return to Stars Hollow! Did Dean remarry? Did Jess’s bookstore become a success? What did Logan do after Yale? We will find out very soon my friends.

Lorelai’s puppy, ‘Paul Anka’, was brought home to fill the void that Rory left when she went to college, and seems he never left.  He’s been living with Lorelai while we were away all these years. He may have lost the spring in his little steps by now, but I sure miss that fluffy little guy! 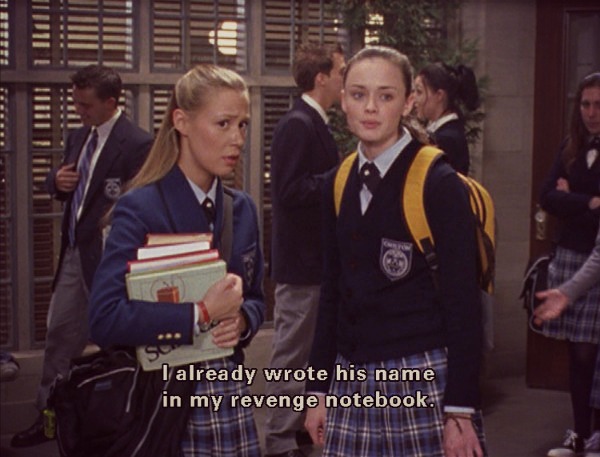 Liza Weil is returning to the role that put her on the map as Paris Geller, Rory’s pain in the rear friend that grew on all of us throughout the show’s run.  She was finally able to snag a boyfriend by way of Doyle the former Editor of the Yale paper, the two were attached at the hip (among other places) almost immediately. I loved Paris for so many reasons, but mainly because she never compromised her beliefs. In her mind everyone else is an idiot, and she’s probably right.

BECAUSE IT’S A MINI SERIES

‘Gilmore Girls’ is coming back as a 4 part mini series. One for each season, Winter, Spring, Summer, and Fall (I love that Carol King song).  Just enough to get you a fix without making you a total GG junkie. Again. The struggle is real! 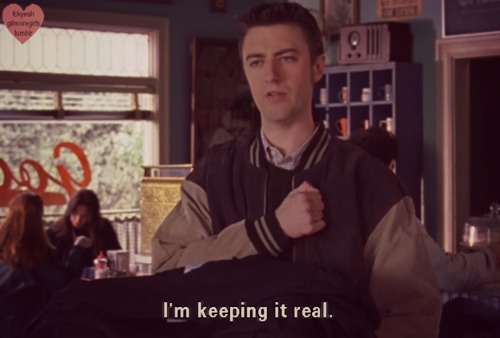 Lane, Mrs. Kim, Babbette, Taylor, and everyone’s fave Kirk, are all coming back! Stars Hollow would not be the same without them. Don’t forget Michel, although he’d rather drop dead that be called a local, he’s very much a part of town’s charm. Word is that Sookie will not be returning. To this I say ‘boo”! She was Lorelai’s BFF, second to Rory of course, and she made the prettiest food, am I right? Who will Lorelai confide in now? I do know that Jackson is coming back, so I’m keeping the hope alive.

No confirmation yet on Miss Patty–hopefully the incomparable Liz Torres will sign on as well.

Did you know that Stars Hollow was an actual town? Well more like several towns.  According to Wikipedia, it was loosely based on the towns of Essex, Wallingford, East Haddam, and Washington, CT. Notable sites are the town square, Luke’s Diner, Doose’s Market, Miss Patty’s Dance Studio, and let’s not forget the Dragonfly Inn. The town was so small that when they finally had their one stoplight installed there was an uproar by its residents. Time stood still in that town and that’s what we loved about it, and secretly why we all wish we could attend one of Taylor’s mandatory monthly meetings. 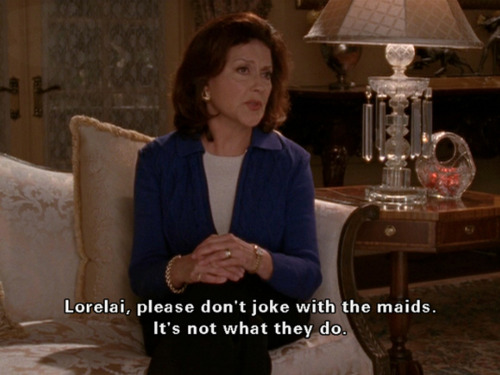 We can pretend to dislike the pretentious matriarch of the Gilmore clan all we want but who are we kidding? Stuffy D.A.R. meetings and all, we can’t help but to love Emily’s interfering ways. This is especially true when we met the real ‘matriarch’ Trix Gilmore brilliantly played by the iconic Marion Ross — she all but squashes Emily underfoot, . Emily’s heart was in the right place, although she may have been too blinded in keeping up with appearances to notice.

Edward Hermann who played Richard Gilmore passed away in 2014.  It’s said that Richard’s loss will be mentioned in the revival.  How? We can’t say for sure. One can only speculate that with the health issues he had on the original show, it would make sense that they laid their beloved Richard to rest. R.I.P., Edward Hermann. 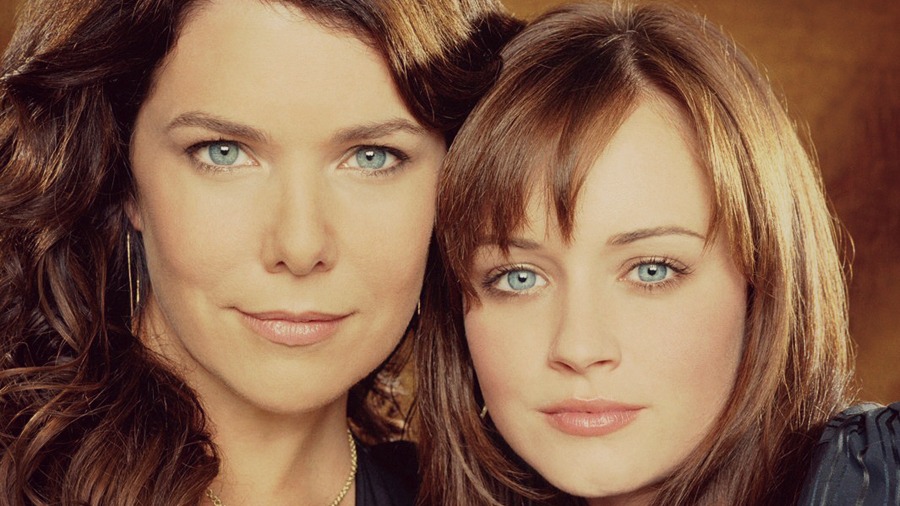 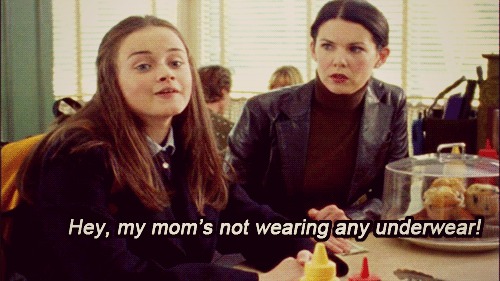 Need I say more? I loved Lauren’s role as Sarah on Parenthood. Other than a few smaller parts, that’s really how I got to ‘know’ Lauren Graham. Then on ‘Gilmore Girls’, I couldn’t believe how flawlessly she gave life to her lines, with a quirkiness that can only be delivered by the Lauren. She came across as not only the coolest mom on the planet, but her motherly love was genuine. Like, Lauren really loved Alexis, and it showed!

Alexis Bledel not only looks like she could actually be Lorelai’s daughter but she had an innocent tone in her voice and soft demeanor that made us all take on a pseudo maternal role. She was the closest in age to her character — did you know Keiko Agena was 27 when she began playing 16-year-old Lane? Hooray for great genes! — and we got to see Rory grow up quite literally before our eyes.

They say parents shouldn’t be their kid’s best friends, but in the case of Lorelai and Rory, the line between who was the parent and who was the kid, was sometimes blurred. The best way they made it through life was thick as thieves, like sisters, and yes, like best of friends. 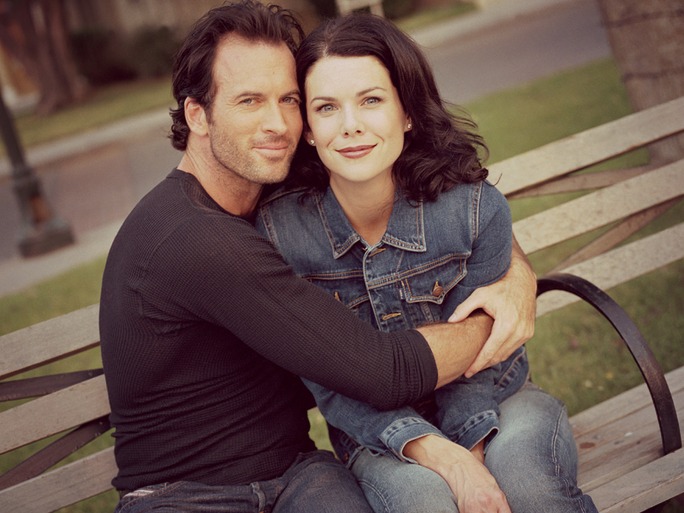 I’ll admit that this on again, off again romance kind of wore on me, but the build up was infinitely worth it! They get together in the season 4 finale. As with any ambiguous TV romance, when the characters finally hook-up you’re left a little ’empty’..now what? While I think their ups and downs got to be a little predictable after a while, the writers redeemed themselves at the end by throwing Lorelai’s ex Christopher into the mix. Which one would she choose? Of course she chose the one who had been there since the beginning..April’s dad, Jess’ uncle, and wacky Liz’ normal brother, Luke. The show ended with a famous Luke and Lorelai kiss, leading us to believe that they stayed true to eachother for good. We’ll have to tune in and see what actually became of our favorite couple.

This duo of Daniel Palladino and Amy Sherman-Palladino created and wrote the show and they are back in full force for the revival. In season 7 they had contracts disputes with the network and due to not being able to come to an agreement, the two parted ways. Their absence was evident, and although the final episodes were better,throughout season 7 the writing was lackluster and the ratings reflected it. As I mentioned, I didn’t watch the show until the now Netflix era, but I can understand why less people tuned it towards the end. Amy and Daniel are the heart of this show and their fast talking, pop culture spewing, sarcastic humor is one of the reasons we so love this story.

“If it was physically possible to make love to a hot beverage, this would be the one.” ~ Lorelai Gilmore 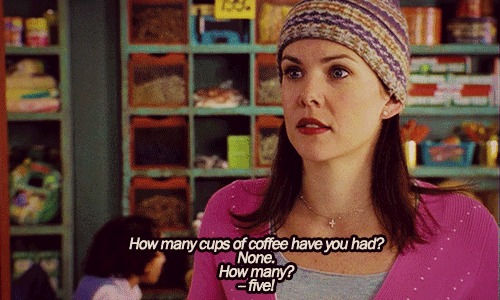 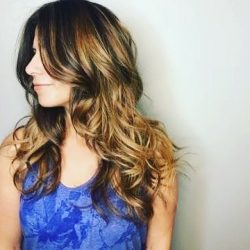